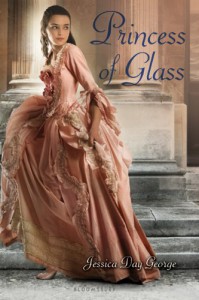 Princess of Glass by Jessica Day George is not the Disney Cinderella you know, and, having read a lot of Cinderella retellings, I'm pleased to say it still brings something new to the table. Poppy is part of a royal study abroad--minus the studying--to make nice with countries whose princes died after failing to break her family's curse. (I spent a semester abroad in Spain and sympathized with the culture shock element.) Poppy quickly finds dark magic at work in the form of a mysterious woman mesmerizing all the men at the balls, and it's decided: Cinderella must die. (Not so much on the dying, but it sounded more dramatic.)

This book is more of a retelling than the last one, which I felt stuck closely to the original tale. Princess of Glass took more liberties with the plot and characters, and it felt more original.

I enjoyed this book, more so than the first I think. It has a spunky heroine, a prince who needs rescuing and a good dose of magic. Definitely worth a read if you like fairy tale retellings and don't mind another twist on Cinderella.