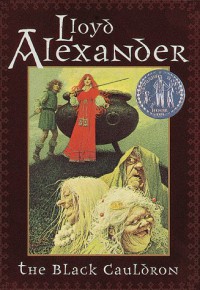 I don't really have anything bad to say about this story. It was entertaining, humorous in the right spots and horribly sad in others. Taran's character develops further, this time through quite a bit of suffering and not a little humble pie. And Doli gets to be his awesome self.

I think the thing that impressed me the most about The Black Cauldron was, as at the end of The Book of Three, the characters end up much where they began with nothing but their experiences. Instead of each adventure resulting in a new collectible jewel or magic power, at the end of the day, Taran and company are still just themselves, and the reader, instead of feeling shortchanged, sees that all is as it should be.

Looking forward to the next in the series.
Tweet